Father Haroutiun Sabounjian grew up in Massachusetts and was a member of the Armenian Church of the Holy Translators in Framingham, MA for most of his youth. In 2015, he received his Bachelor of Arts in Philosophy, minoring in Music and French, from Boston College. Father Haroutiun graduated from St. Vladimir’s Orthodox Theological Seminary and St. Nersess Armenian Seminary in 2018 with a Master of Divinity and Certificate of Armenian Studies, respectively. He completed a one-year pastoral internship under the guidance of the Rev. Fr. Shnork Souin at the Sts. Sahag and Mesrob Armenian Church in Providence, RI. Appointed in February 2021, ordained in June 2021, he is currently serving as Parish Priest of the Armenian Church of the Holy Resurrection in New Britain, CT. 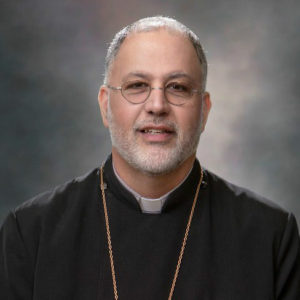 Rev. Fr. Kapriel Mouradjian received his bachelor's degree from the University of Rhode Island in 1985, with a concentration in economics and political science. For the next 15 years he worked in investment banking.

In 1997, he was ordained as a Deacon by Archbishop Khajag Barsamian, Primate. Soon thereafter, he entered St. Nersess Seminary to prepare for the priesthood. He successfully completed the seminary's four-year program and graduated in 2003.

To expand his knowledge of pastoral ministry he participated in the Clinical Pastoral Education program at St. Vincent's Hospital in Massachusetts, while serving as a pastoral assistant at the Church of Our Saviour in Worcester, MA.

Archbishop Barsamian appointed the then-deacon to a two-year Diocesan-sponsored pastoral internship program at the St. Gregory the Enlightener Church of White Plains, NY, under the supervision of Rev. Fr. Karekin Kasparian.